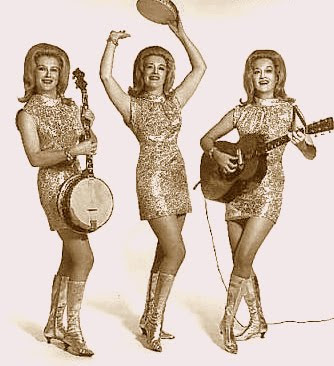 THE GALS ARE BACK IN TOWN! In the mid-1980’s The Del Rubio Triplets became an overnight success-after 40 years of playing around the world, being chased by Abbott and Costollo, opening for Victor Borge and entertaining in every Nursing Home in Southern California! Three Gals Three Guitars made The Del Rubio Triplets household names-if your household happened to be in Hollywood-during the mid to late 1980’s The look-alike sisters went from the D- list to opening clubs from Tokyo to Brussels; they appeared with everyone from John Waters to Nathan Lane. At the height of their career Millie, Eadie and Elena were everywhere. They showed up on TV shows like Married With Children, Night Court and The Golden Girls. They did a classic turn by singing “Walkin’ In A Winter Wonderland” for Pee Wee Herman’s 1988 Christmas Special. They became the Queens of Kitsch and icons for outsiders who didn’t quite fit into the typical mold of pop glamour and pre-packaged talent. We here at dadastic! central are pleased to be able to offer the original 12” vinyl recording of the ladies’ first album. The treats on Three Gals, Three Guitars include standards like Besamo Mucho to The Neutron Dance and Walk Like an Egyptian…all performed in that inimitable Del Rubio style that made them the Queens of 80’s Kitsch. Go-go boots, hot pants, good cheer and unlikely covers by The Del Rubio Triplets make this collectors item. This LP is from the first, original 1988 vinyl pressing on Cabazon Records.
BUY THE 12" VINYL LP HERE
LISTEN TO 'WALK LIKE AN EGYPTIAN' BY THE DEL RUBIO TRIPLETS

20 GREAT TRACKS BY THE ORIGINAL ARTISTS

A CAREER-SPANNING COLLECTION BY A SEATTLE LEGEND

NOT YOUR MOTHER'S JOSIE COTTON

I LOVE THE SMELL OF ANGORA IN THE MORNING.