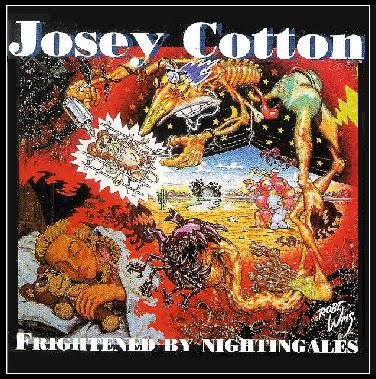 Mention Josie Cotton to anyone familiar with the pop music of the 1980s, and they're bound to think of her minor hit 'Johnny Are You Queer?'. The song was a pitch-perfect example of new wave. Fun, danceable, ironic, and with a reverence for the bubble gum music of the 1960s. No matter what other great contributions Josie ever makes to pop music she'll always be remembered for her fun and audacious first single. Of course, Josie has released albums since then, notably 2005’s 'Movie Disaster Music' and 'Invasion of the B-Girls' in 2007. Both are natural extensions of a genre that Josie helped define with 'Johnny Are You Queer?' and her debut album 'Convertible Music'. It seems a role she was born to.

Now forget everything you think you know about Josie Cotton.

Frightened By Nightingales was first released in the mid-1990s on the French Silences label. It was a sharp departure from the sound Josie Cotton fans had come to expect. Keeping that in mind she chose to temporarily revert to the spelling of her family name and release it under the name Josey Cotton. The CD was almost impossible to find in the US, so Cotton and husband Geza X released a small pressing on their own Roxco Records imprint. The album never got widely distributed, so for over a decade Frightened By Nightingales has languished and is hardly known outside of a core of Josie Cotton devotees.

The songs are more expansive and haunting but always accessible and engaging. The material allows her usual upbeat delivery to visit melancholy, drama, and depth in a way that seems perfectly suited to her voice. Musical styles include alt-pop, tango, fiddles, ballads, lonely guitars, and mysterious keyboard washes. They’re combined with lyrics about lost love in the Himalayas, empty spaces and empty hearts in the high desert and self-exploration of a very personal nature. There’s even a bit of Esperanto thrown in. This album is proof positive that Josie is a serious artist that belies her being pigeon-holed as a nostalgic new-wave pop diva. This is, as one critic says, this is “spooky, arty, dream-pop“.

The album was written, arranged, and largely backed by Bill Rhea who co-produced Frightened By Nightingales with Geza X. The instrumentation and mixes are artful but unpretentious with vocal and musical surprises at every turn. This album may provide more detail and nuance, but it’s not overly dense or beyond the enjoyment of fans of music Josie is better known for. But if listeners hoping for chirpy, recycled 1980’s kitsch they will be disappointed. Everyone else will be amazed to hear a side of Josie-Josey-Cotton that they were totally unaware of. We’re thrilled to once again offer this overlooked gem! The track "Armadillo Blue" is featured on the compilation THAT'S DADASTIC! The CD will be availabe again in the Fall of 2020.  Click for more information

20 GREAT TRACKS BY THE ORIGINAL ARTISTS

A CAREER-SPANNING COLLECTION BY A SEATTLE LEGEND

NOT YOUR MOTHER'S JOSIE COTTON

I LOVE THE SMELL OF ANGORA IN THE MORNING.